Are you looking for something to read this holiday season? Perhaps something dark but ultimately uplifting?

Allow me to introduce to you the long-awaited installment, WARM HANDS COLD HEART, a Marshall House Christmas Mystery, 7th book in the series and the newest book that has taken a prominent position on my book shelf! 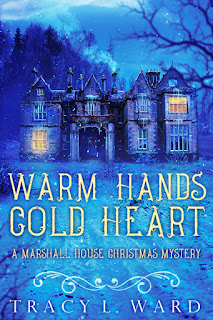 Recently married and awaiting the birth of her first child, Margaret Davies takes a position at Wendall Hall, a privately funded charity for unwed, expectant women in a small town east of Edinburgh. With Christmas around the corner and a number of birthing rooms empty, Margaret and Wendall Hall founder Violet Bane turn their attention to the babies in the nursery, ensuring they arrive at their adoptive homes in time for the holidays.
Wendall Hall’s Christmas preparations take an unexpected turn, however, when a body is discovered in a snowbank outside the Hall’s side door the day following a harrowing storm. It doesn’t take long for Margaret to realize not everything is what it seems at the benevolent charity. Decades-old secrets lurk in the shadows of the old manor house, secrets that go far beyond penniless women trying to hide their scandalous pregnancies, secrets Violet Bane had meant to take with her to the grave.

Do you remember when I said the number 7 was a meaningful number to me? Mercy Me, my book released in June, may have been my 7th published novel, but WARM HANDS COLD HEART, the newest MARSHALL HOUSE book is 7th in the series. 2018 has been a great year for sevens! I'll be a posting a different blog post about that factoid next week!

Posted by Tracy L Ward Author at 6:46 AM No comments:

Seven has always been a magical number for me. I am constantly looking for the number seven, or a combination of numbers to create seven in my daily life. When I signed up for my first cell phone I refused to take any number without three sevens. When we purchased the house we currently live in I took the seven in the street number as a good sign (which has also featured prominently in the street address of the last 4 homes we've lived in). Right now we own six cats and I'm constantly telling my husband we are lopsided because we don't have seven. So it's no surprise that I feel a special connection to my newest book, my seventh published novel. 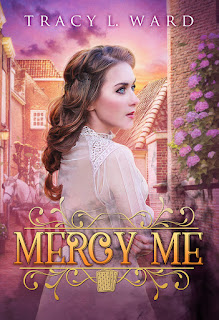 Surprisingly it's not the 7th in the Marshall House series (that one comes out in the fall), but rather a the first book in a new series set in Canada, my home and native land. While the number seven is magical for me, my new book, MERCY ME, is pretty magical too. Mercy Marigold Eaton is a very special character, able to piece together the lives of those who have passed with a single touch.

It's a safe to say she has one special gift, but what she can't do is divine the future, or actually communicate with the dead but don't tell any of her clients that! Forced to raise her daughter alone Mercy turns her connection with the dead in a thriving livelihood and does well for herself in the bustling Victorian city of Toronto, far away from the troubles of her past.

Her world is turned upside down, however, when she is unwittingly swept up in to a double murder investigation led by the dashing, and exceedingly skeptical, Jeremiah Walker, detective with the Toronto Police. Fighting her own demons rooted in a deep distrust of the law, Mercy quickly finds herself falling for his charms until she finds out he's a married man.

MERCY ME is currently available in ebook format and will be in paperback soon!