October has a real historic connection to witches but it’s not about Halloween or ghostly ghouls. A real life horror took place in North American three hundred years ago that resulted in the deaths of 19 innocent people and only came to an end during the month of October many, many moons ago.


In January 1692, three preteen girls became ill, suffering fits of hysteria, arching their backs, screaming uncontrollably and pointing to figures that weren’t there. After three hundred years the cause of the sudden outbreak remains debated. More recently scientists have suspected tainted wheat as the culprit, identifying a certain strain of mold that could have brought about the girls antics. Others suggest it was all a game, a series of tricks to bring some excitement to their otherwise monotonous and homogeneous lives.

It cannot be blamed entirely on the girls, however. Medical science of the day was largely based on superstition and an old boys’ club of information being passed on down through the graduating classes with little scientific advancement. This was largely because autopsies were not permit and so indepth studies could not be done to learn the true workings of the physical body. When the girls became sick the doctor, limited by his archaic training, said it was the work of the supernatural. The Witch Craft Craze that had been stagnant in Europe for over 300 years was winding down (tens of thousands of accused witches, many of them women, lost their lives during that time) but that seemed to have little effect on the hysteria that betook the New England town of Salem.

Hounded by the local magistrates to confess the origins of their bewitched ways, the girls pointed an accusatory finger at three local women: Tituba, a slave from the Carribean, Sarah Good, a homeless woman and Sarah Osborne, an old, impoverished woman. All three were brought before the court and while Good and Osborne denied the accusations, Tituba confessed saying the devil bid her to do it. Interestingly Tituba survived the year-long hysteria of accusations and executions while the two Sarahs did not.

Many women were brought before the court including Martha Corey, a devoted church attendee. It took little to accuse a person of practising witch craft in those days. All it took was a single word and like children in a modern school yard the people of Salem Village and Salem Town were quick to point fingers to others in the hopes it would keep suspicion away from them. In May 1692 a special court, the Court of Oyer and Terminer,  was convened to deal with large numbers of supposed witches and the first person brought forth was Bridget Bishop, an outspoken older woman who had taken to wearing red (the devil’s colour) and was known to be promiscuous. She was tried, found guilty and was the first to hang. 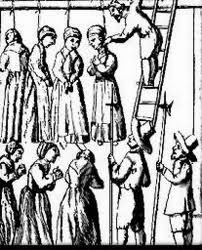 Spectral evidence was all that was needed to deem a person guilty. A dream or vision seen solely by an accuser was the only evidence required to sign a person’s death sentence. After Bishop, five people hanged in July, five more in August and then eight lost their lives in September. It’s hard to imagine how accusers slept at night knowing they had sent a number of innocent people to early graves.

In October two men, Cotton Mather, a respected minister in the area, and his father Increase Mather, then president at Harvard, denounced the use of spectral evidence. Governor Phipps agreed, though this may have something to do with his own wife being accused of witchcraft. 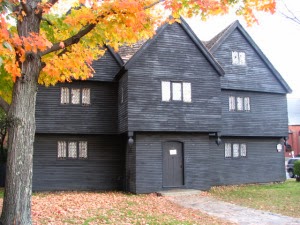 On October 29th, 1692 the Court of Oyer and Terminer was dissolved. The damage had already been done. 19 people lost their lives including Giles Corey, a 71 year old man who was pressed to death under tonnes of rocks in a slow, painful torture.

By May 1693 56 people were discharged from jail, though they were still required to pay money to the town to cover their confinement costs! Overall nearly 200 people had been accused of witchcraft.

To read about my family’s modern day trip to Salem, Massachusetts and see more pictures, visit Mysteristas, where I had the opportunity to guest blog about our experience.
Posted by Tracy at 7:46 AM No comments: