Today a news story broke about the heirs of poet Edith Newlin suing CBS for using a slightly altered version of Mrs. Newlin's poem "Soft Kitty" on their hit television show, The Big Bang Theory. The use of the poem on the show was so well received it generated a host of paraphernalia (t-shirts, posters and stuffed cats) that not only helped viewers connect with the hit show, but also furthered the network's marketing reach.

So far today I have read three articles regarding the news including BBC, The New York Times and now CBC here in Canada. As with most stories I find myself inexplicably drawn to read the comments on the news outlet's social media pages. I guess it's my people-watching nature that begs me to find out what various people think about when it comes to what's happening in our world. I must say the comments left me rather astonished at the disregard for an artist's work and their rights to its use. Perhaps we as a society are influenced by our internet-easy ways that we perceive artwork as public domain. We think nothing of copying and pasting a beautiful computer altered fairy scene or landscape picture all over the internet with little regard to the original photographer. Heck, an entire social media venue, Pinterest, exists to satisfy our need to share images we find awe-inspiring.

Perhaps it's The Big Bang Theroy's popularity that leads many fans to chose sides so early on. The show is in it's 9th season, a testament to it's appeal. Humans are not free of bias and our celebrity worshipping culture tends to render us apologists whenever we hear of our favourite celebrity friends getting into any sort of trouble. Take Jian Ghomeshi for instance, a b-list celebrity here in Canada, who fell from grace in October 2014 when allegations of sexual assault surfaced in the media. Ghomeshi tried to spin public opinion by decrying the allegations as "an ex-girlfriend with an axe to grind". Many of his fans were quick to jump to his defence, even after only hearing his side. As more and more details surfaced regarding his improper advances and completely abhorrent behaviour the support for Ghomeshi dwindled and then completely dried up as five charges were laid against him and numerous women came forward with allegations. We, as a society, tend to side with the familiar faces and look less kindly on the unknown person. We may even tell ourselves "I know Sheldon and Leonard. There must be something else going on." 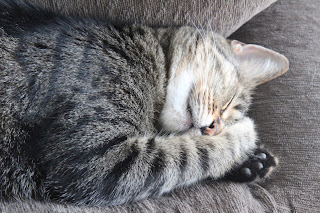 Even if we put aside our celebrity bias we are left with an inherent distrust of any litigation. It's been my experience that the general population is grossly uneducated on the issues around lawsuits and the court system. We tend to rely heavily on the court of public opinion and not on the real facts of law.

Many of the social media comments I saw included the question; "why now? Why would a lawsuit be launched now after CBS has been using the poem for years?"

To me, the question is irrelevant. Whether the poem just aired on screen last night or last decade, it doesn't matter. Mrs. Newlin's rights extended 50 years following her 2004 death and until 2054 the rights to the poem remain with her heirs. That's the law. From what I have gathered from the articles, the lawsuit was initiated recently after one of Mrs. Newlin's daughters completed an online search, looking for material to use in a biography of her mother's life, and discovered the show had been using her mother's poem for a number of seasons.

"Somebody is clearly low on cash" was another sound bite I saw relentlessly repeated.

Of course because lawsuits like these are inexpensive for the initiator and fairly easily undertaken [insert sarcasm]. In reality lawsuits are freaking STRESSFUL. They wreck havoc on personal lives and often result in loss of respect amongst people who perceive the pursuant as an opportunist. Lawsuits are costly in regards to time, money and community respect. Even if the case is found in favour of the filer the very fact that they filed in the first place is a strike against their respectability. No one enters into a lawsuit lightly. It's our ignorance regarding civil law that feeds our mistrust. Somehow in North America we have equated a lawsuit with easy money and that makes us hard working, middle class souls angry. As far as I see it, we need to stop looking down our noses at lawsuits and we need to reserve judgement. Some lawsuits are complete shyte filed by rich elite with nothing better to do, while most are legitimate lawsuits that bring to light issues that need to be addressed. Often times a lawsuit filed for millions of dollars is settled for much, much less.

"Please, the writer should just be happy for the exposure."

Of all the comments I read this one got my goat. Rising musicians are often asked to play at clubs and venues for free, their payment? Exposure. We don't ask Rhianna to perform for free or Justin Beiber. We understand that they have expenses and compensate them for their time and talents. A struggling artist should be treated just as fairly, if not more so. A writer has a similar plight. The poem Mrs. Newlin wrote is most likely part of a large body of work produced over what appears to me to be a long, long lifetime. At the very least she should be given proper credit and even though she has passed away she deserves the compensation. It doesn't matter that her work received notoriety after her death. Had her poem been so successful in life it would have meant a nice nest egg to pass on to her family.

There is a reason copyright extends beyond a writer's death. Imagine how society would take advantage of an artist if we knew their work was public domain upon their death. We'd never buy another CD, novel or Thomas Kincade puzzle while the artist lived. We'd quickly catch on to the fact that if we just wait until they die we can all have a free for all. We'd be producing Christmas cards and music videos left and right, using the artwork of the greats who kicked the bucket just yesterday. Oh the profits we could make off the hard work of the artists. Imagine what would have happened after Terry Pratchet's death this past year. All the money from Mr. Pratchet's books divided up amongst overnight presses cashing in on an author's death notice. It turns my stomach. Mr. Pratchet would have been hard pressed to create a living from his art and may not have been able to produce such a prolific portfolio of work.

Creating art, whether it's music, novels or paintings, is hard, hard work. I personally know what it's like to be a mid-list author. I have four books to my credit, and all are selling nicely. From what I understand I make a good wage for an author. I make a great wage for a self published author. Do I make enough to say I make a living? No. Not even close. I spend a year on each book. Which amounts to a minimum of 10 hours a week, but more often is 20 hours or more depending which stage of the process I am on. Am I fairly compensated for my 10-20 hours a week? No. It's even worse when I find my books illegally sold on a pirating site. It's my words, my hard work benefiting the bottom line of someone who only copied and pasted. It's theft, plain and simple.

I will readily admit that I hold a bias when it comes to copyright cases. I am not ashamed to admit that when faced with a news story like Soft Kitty that my knee-jerk reaction is to side with the artist, the artist who shouldn't be expected to work for free, for exposure, for multi-billion dollar conglomerate cashing in on the work of nursery school teacher from New Hampshire.

*I've included a picture of my cat, Theadora, who is a very soft kitty.