Christmas is not what it use to be. Prior to the Victorian era Christmas was hardly noticed and was a small blip on the average person's calendar. You wouldn't think so the way modern people have made such a show of it but much of the way we celebrate the festive season can be linked back to Victorian England.

We all know (or should know) the Christmas tree was a German tradition brought to England by Prince Albert, who was born and raised in Germany. Dr. Peter Ainsley and the Marshall family would have had a table top tree decked out in small white candles, sweets and small presents. Most decorations were handmade like paper fans and dried apple or orange slices. As the young lady of the house Margaret would have invited friends over to create ornaments and trade gossip.

1843 was the year Victorians first saw the Christmas card. Artist J.C Horsely painted a scene of a family around a dinner table. The card included a Christmas message. Distributed by Henry Cole, each card cost a shilling so it remained out of reach for the average Victorian. The Marshall's, however, would have made sure they gave out some to their closest friends. The sentiment caught on amongst the average and lower classes and soon children and adults alike were making their own cards to send to loved ones and friends. 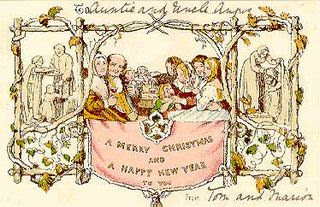 Gift giving was a well thought out endeavour. Victorians would plan their gifts for others many months in advance. It was believed giving gifts would bring good luck and continued prosperity in the new year. Victorians believed the best gifts were handmade. Needlework and useful items were quite popular.

Christmas dinner was an elaborate affair amongst the higher classes, the Marshall's would have spared no expense while hosting notable people and society elite. The average family would have enjoyed beef on the table Christmas Day, but Ainsley's family could expect goose or chicken. Turkey was not popular in England until the late 19th century. Christmas pudding was a annual tradition. First mixed together on "Stir It Up" Sunday (the Sunday before Advent), Christmas pudding is made of beef, raisins, prune and sugar in a pudding cloth and cooked in a pot, usually with other food. Serving Christmas Pudding was often a dramatic, ceremonious affair, presented at the table by the cook who would receive ohh's and ahh's from those gathered. Decorated with a sprig of holly and a brandy sauce set ablaze, Christmas pudding was a highlight of festivities.

Most of Christmas Time was reserved for visiting with family and friends without a lot of emphasis on presents. Traditions like wassailing (carolling door to door) encouraged interaction between neighbours and offering food like treats.

Traditionally Boxing Day was the first weekday following Christmas and was set aside for charity work. Victorians would place money and gifts in small boxes to give to the servants, trades people or the needy. For the affluent family like the Marshalls, it would be viewed as duty to assist the poor.

Want to learn more about the history of Christmas? Check out Jeri Westerson's blog, http://www.getting-medieval.com/ Jeri writes the Crispin Guest medieval noir series and her blog post is quite informative.
Posted by Tracy at 8:26 AM No comments: